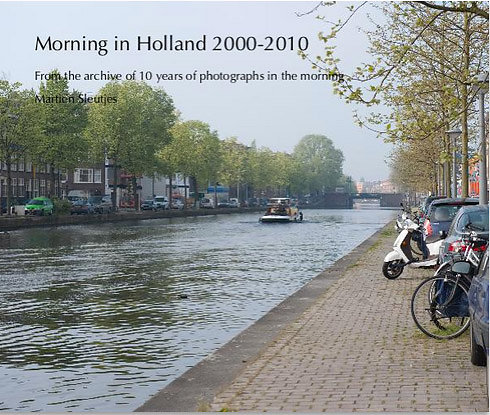 When I started working as webmaster for the website of Radio Netherlands Worldwide we had problems with getting image material. To promote the use of a digital camera’s by our own journalist I started in 2000 a (work)daily column called Morning in Holland (Hollandse Ochtend). Every morning in my own time on my way to work I made a picture in between Amsterdam where I live and Hilversum where the office was. Both places are in the province of North-Holland. The province is is a tiny but densely-populated area of The Netherlands. So, the ‘column’ was named after this province.

In the first month I was afraid that I would run out of ideas but slowly the subjects presented themselves. I stopped with the column when the ‘old’ Radio Netherlands stopped and I was fired. At that time we just were able to celebrate 12,5 years of this column.

After 10 years I made a book with a selection of the thousands of images. It was divided into themes: daybreak, rivers (even in this small area there are a lot of them), Naardermeer (a beautiful nature resort), mills (of course), animals (from cows to cats), activities, winter, water & mist, architecture and stillness. The book is still available ( //nl.blurb.com/b/1845562-morning-in-holland-2000-2010 ).